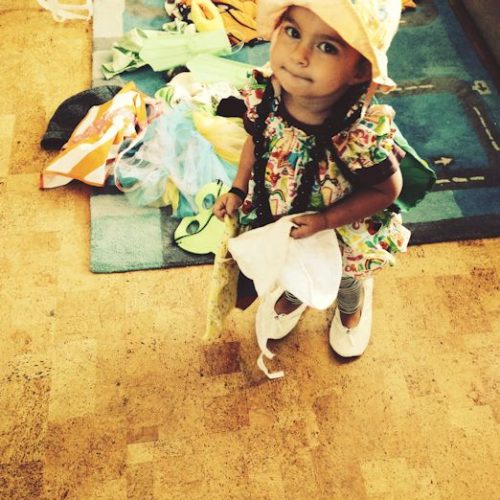 “The inability to play independently inevitably increases the child’s sense of dependence on the adult. Conversely, independent activity allows him to experience autonomy.”  – Éva Kálló and Györgyi Balog, The Origins of Free Play

I often hear from parents concerned about their child’s inability to play alone. They perceive their child as either extra-needy, too “attached” or too social, or just not the type to ever play independently.

In the 20 years I’ve been working with parents and their infants and toddlers, I have yet to meet a child incapable of reaping the joys and benefits of self-directed play. I’ve noticed that problems with play are primarily ours, not our children’s. And that’s good news, because it means it’s also in our power to remedy the issue.

The first step is recognizing how our fears, guilt, and misperceptions are disabling play. Besides believing that our child is innately incapable in this area, we might also think:

There is one common concern that is valid and true: We cannot and should not force children to play (as if that were even possible). And I’ll add: we should not even coax them to play, because coaxing signals to kids that we’re uncomfortable, tends to increase their resistance to whatever we want them to do, and can even turn an activity as innately pleasurable as play into a chore.

Our misperceptions and projections around play can make it virtually impossible for us to do the one (and only) thing necessary to free our children up to do it, which is to simply set a limit – to clearly, confidently, comfortably, and calmly state what we will do (i.e., make lunch, get a cup of tea, go to the bathroom) and for how long (approximately). Ideally, we leave our child in a safe, familiar play space where he or she has age-appropriate toys and objects.

And then, the hard part — allowing him or her to express some version of “noooo, I want you to stay,” which will probably sound more like, “I’m shattered, devastated, crumbling into a million tiny pieces! How could you do this to me, you mean, cruel, selfish parent?!”

So, there’s certainly plenty room for guilt if we decide to go there, but that only makes letting go to make room for play even more impossible (for both parent and child).

I recently consulted with a psychotherapist I’ll call Ruth, a kind woman I felt an instant rapport with who had adopted her son when he was a year old and kept him close and content to ensure he’d be attached. When she contacted me, he was 3 ½, and she was feeling exhausted and trapped because he was unable to play without her. He screamed and cried any time she tried to leave him. She worried that he’d been damaged somehow. When I assured her that this was a simple boundary issue that I knew she could fix, her mood lifted, and we ended up laughing about some of her misperceptions.

Ruth shared that there was one time her son had been able to play on his own… She’d had the flu and a fever so high that she couldn’t budge from the sofa even to lift her head, and her son entertained himself with blocks, cars, paper and crayons for hours. “What does that tell you?” I asked, a grin in my voice.

Several weeks later I received an update from Ruth thanking me for the complete turnaround she and her son had made, both of them reveling in his newfound love of play.

It can be challenging for us as parents to recognize our part in creating play dependencies.  In this excerpt from a RIE Parenting discussion group, Mary Jane shares how she’s learning to free her daughter’s play:

Just wanted to share a happy progress report! Last week I was looking for encouragement to establish some independent playtime for my two-year-old. We’ve been working on it every day, and it gets better every day. This weekend we continued to work on it, and my husband and I could shower and get dressed with her happily playing in her room.

Today, she had no complaints when I left her room, and I could check in on her with the video monitor while I got dressed. She has been playing the past hour on her own — a world record for us! There has been giggling, reading, singing, talking to her babies, dramatic scenes, and lots of silliness going on up there. She called for me at one point and I wasn’t quite ready, so I told her it would be about ten more minutes, I still needed to brush my teeth. Her response was a happy and enthusiastic, “Yeaaaahhhh!!!” And then she went back to playing. Meanwhile, I’ve been able to get so much done on my own! Thank you so much for the encouragement and confidence to work on this. I’m ever grateful for this group and everyone that takes the time to help each other out.

Here is my process if it helps anyone get over their anxieties about it: Beforehand, the only established independent playtime was in a play yard right outside of my bathroom when I would shower. She accepted it and willingly went in there every day, but she would start asking to come out as soon as the water was shut off. So it was about 10-15 min where she was truly lost on her thoughts and play, but after that it was a lot of complaining and calling my name. I was having the nagging feeling that she was capable of playing longer, but I was distracting her. She definitely knew when shower time was over!

I decided I needed to work towards moving her independent play to her gated-off room upstairs, since there is a video monitor and I felt she would feel most comfortable in that space. The first time I tried it my anxiety came through, and I told her too many times I was leaving. There was lots of crying and resistance. After this lovely group’s encouragement, I tried again the next morning at the same time and told her only once, and she cried a little when I left but quickly settled into playing. She would return to complaining on and off… but still, progress.

The third day or so, very little if no protest at all and straight to playing until she pooped… Every day we did the same time, same place, and I worked so hard to tell her one time, then confidently leave. It has improved so much and she plays for much longer, especially since she can’t hear when the shower is over or be reminded that I’m right there. She finally gets lost in her own play, which is what I’ve been hoping for. The other day during another time that we were both in her room, she actually grabbed the gate that was leaning against the wall and was pointing it out to me, like “let’s put this up, it goes on my door.”

For me, I struggled with having confidence that she would be okay on her own, and I was overthinking what time would be best, if all her needs were met, etc. But she is fine and very capable. I was holding her back with my own doubts and fears. I really should have started a long time ago.

For further support and clarification, here’s a podcast on this topic:

and offer a complete guide to boundaries in No Bad Kids: Toddler Discipline Without Shame

Here are some informative articles about independent play:

What is Play, All They Need is Play, and just about everything else on Lisa Sunbury’s blog Regarding Baby

My numerous posts on play, especially Becoming Unglued, Solo Engagement, How To Stop Entertaining Your Baby and 7 Myths That Discourage Independent Play 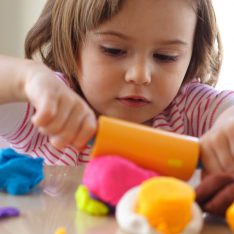 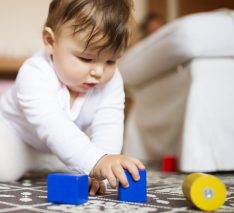 Independent Play: Five Hints to Get the Ball Rolling