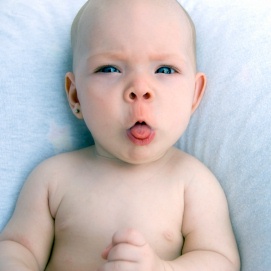 I recently learned about Magda Gerber’s approach when I read the book, “Respecting Babies“, by Ruth Anne Hammond.  I purchased the book because I’ve had a very difficult time with our second daughter, Julianna, who is now 5 1/2 months old.  We also have a 2 1/2 year old daughter, Cassidy, and I stay home with the two of them.  Julianna screamed inconsolably for many hours each day for the first few months of her life, which was very difficult for all of us, especially her sister Cassidy.  We’re not quite sure why – she was diagnosed with dyschezia, so we think it was probably the combination of stomach discomfort and overtiredness.  Although she’s gotten better as her digestive system has matured and she has learned to put herself to sleep, she still gets fussy throughout the day.

I enjoyed reading Ruth’s book and I’ve started putting Magda Gerber’s suggestions into action: slowing down, talking to Julianna as we do things, taking the mobile off the changing table and having her look at me while we change her diaper, etc.  I’m running into difficulty, however, when I try to let her play independently.  She will lie on a blanket and play with her toys for awhile (10 minutes or so), but then she seems to get bored and starts to scream until she is picked up.  The screaming upsets Cassidy, which is why it’s hard for me to let her cry for very long.  To tell the truth, it upsets me too.  I wish there were a video or some way to watch parents implement the RIE approach.  I watched the videos you posted on YouTube so I can see how happy babies can be when they are allowed to play independently.  I just need some help getting Julianna to that place.  My inclination is to let her cry for a few minutes to see if she’ll stop, but so far when I’ve tried that, it hasn’t worked.  She just cries harder.  Do you have any recommendations?

I’m sorry to hear that you and Julianna have had such a rough start. I can empathize with spending months trying to comfort a screaming baby. My third child had terrible colic that would bother him in the late afternoons and kept him (well, both of us) up for hours in the middle of each night. I’m not familiar with dyschezia, but I learned through Magda Gerber that colicky infants are especially sensitive to overstimulation and really need that quiet environment, which isn’t always easy to provide when you have older children. The instinct we have to comfort digestive issues by nursing, rocking and distracting an infant often leads to over-stimulation and can make it harder for a baby to settle and sleep.

After those first months my son grew out of his colic, and he is also one of the infants you saw in the videos playing joyfully at 4 months old. That’s because we placed him on his back on blankets indoors and outdoors to move and look around whenever he wasn’t eating, bathing, having his diaper changed, or needing snuggles. This was helpful for his colic, too, because being free to move his arms and legs in a peaceful setting helped ease his gas and relieve his stomach tension. If he fussed, we didn’t pick him up instantly, but talked him through it first, giving him the opportunity to self-soothe.

Julianna’s ten minutes of ‘self-directed play’ on the blanket is a good beginning. But I don’t believe (and neither would Magda Gerber) that she becomes bored.  Infants find so much to engage their interest in this new fascinating world that boredom is not part of their repertoire. Tiredness, discomfort from teething and digestive issues, and overstimulation definitely are. I just ‘graduated’ a group of five 2 to 2-1/2-year-olds. They have been playing in the same environment with the same basic toys each week for years, and they weren’t even close to becoming bored.

Of course the screaming upsets you and Cassidy! I wouldn’t leave Julianna crying and screaming during her playtime, or anytime. Before she escalates to screaming, try getting down on the floor close to her and soothing her, stroking her and talking to her about what is going on…”I hear you crying. Are you uncomfortable?” You could even lie down next to her. She might just need your reassurance and your company.  Sometimes, we give babies the impression that they only have our attention when they are picked up and held in our arms. Stay next to her while she is in on her back in an independent position and give her emotional support.

If she continues to complain, ask if she needs a break and would like to be picked up. Get in the habit of encouraging her to communicate with you, if you haven’t already. If she indicates a desire to be picked up, stay seated on the floor and hold her there with you. This is what we practice in the parent/infant classes. If she calms down you can let her know you will try placing her on the floor again.

When Cassidy is around, invite her sit on the floor with you and her sister. Encourage her involvement in this process. Let Julianna know that her floor time is not a time of abandonment, but a situation when she will have your quiet attention sometimes and her sister’s (probably much less quiet attention), too.  She’ll be increasingly fun to watch as she becomes more mobile and able to actively explore and invent play with the toys and objects that she chooses. When she becomes more accustomed to her play time, and is in her safe cordoned off play area, you’ll be able to say, “I’m going to do some work in the kitchen now, and I’ll be back in a few minutes”. She may cry for a moment, but will calm down soon (unless she is tired, hungry or uncomfortable) because she has learned that you will return. This is all about developing new habits…slowly and steadily.  Your patience will pay off.  Independent play is well worth the effort!

In my infant class yesterday, we observed an inspiring example of infant perseverance, independence and self-soothing. Six month old Josephine is just beginning to inch forward on her belly. She seemed to take interest in a wooden object a little more than a foot away from her. She moved a tiny bit towards it and then stopped, placed her head down on the rug and sucked her thumb. After a moment she lifted her head and inched forward a bit more, but then paused and rested again, took another thumb sucking break. She repeated this exactly a few more times, inching forward and then resting until she finally reached the toy, calm and comfortable all the while. Wow!

Our goal is not to force this independence, but to be open to recognizing all a baby is capable of doing on her own and to honor it. Please hang in there, and I hope you’ll keep me posted on your progress! 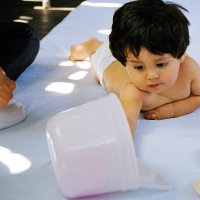 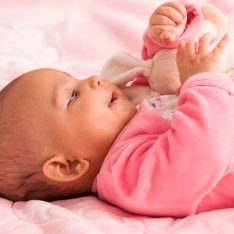 Independent Infant Play – How It Works