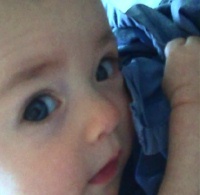 Infant self-soothing is often misrepresented by descriptive terms like tough love, crying it out, leaving babies to “deal with it” on their own, and even neglect. Apparently there are people who misunderstand the concept, or use it as an excuse to ignore a child. Perhaps it’s in reaction to those people, real or imagined, that others have wholly rejected the idea, shutting the door on the possibility that babies could ever benefit from being allowed to calm themselves.

As is often the case, the truth isn’t black or white. When a sensitive, responsive parent or caregiver is open to allowing a baby to initiate self-soothing, and supports that, but does not force, demand, expect, or abandon a baby to do it, the result is healthy and productive. Affording babies the bit of room they need to help them develop their individual coping strategies in our presence is a loving, mindful practice.

Supporting a baby to self-soothe can mean listening to her complaints for a minute or two while she finds her thumb, rather than immediately giving her a pacifier. It can be about remembering to offer two teethers and allowing the baby to choose one and grasp it herself rather than automatically placing something in her mouth. It might mean allowing our baby to cry in our arms to release her feelings at bedtime instead of rocking, patting, or jiggling her, etc., as explained in “Helping Young Children Sleep” from Hand-in-Hand parenting:

“Children’s systems are built to offload feelings of upset immediately and vigorously. But our training as parents is to stop them from offloading their feelings! We are taught to give them pacifiers, food, rocking, patting, scolding, and later, time outs and spanking, if the crying or screaming goes on for more than a minute. We are taught to work against the child’s own healthy instinct to get rid of bad feelings immediately. So our children store these upsets, and try many times a day to work them out, usually by testing limits or having meltdowns over small issues. If they can’t offload them during the day, the feelings bother them in the night” – Patty Wipfler

Staying open to the possibility of self-soothing allows babies to actively take part in their care to the best of their ability. As Magda Gerber writes in Dear Parent: Caring for Infants With Respect, “Infancy is a time of great dependence. However, babies should be allowed to do some things for themselves from the very beginning.” This encourages and empowers our children and ultimately makes our job easier.

In “Helping Children Learn To Take On Challenges” a story from her book Mind in the Making, Ellen Galinsky shares findings from studies of pre-term infants (born 10 to 12 weeks before their due date) in neonatal intensive care. When the nurses and doctors took charge of the babies’ care without taking the time to read their cues or allow them to actively participate, the researcher, Heidelise Als of Harvard University, noted, “It seemed we were wasting a lot of the baby’s energies that were very precious.”

As Galinsky explains, “When a baby who was initially feisty gave in, the medical charts would record that the baby had become well adjusted. But Als saw a different reality: “The baby had given up. The baby just let the world happen.”

“After documenting and recording behavior, they launched into a study where the nurses “read” and then responded to the baby’s behavior in ways that built on that baby’s coping strategies, and thus gave the baby more control. The results of this experiment were impressive. There was reduced severity of chronic lung disease in these premature babies, improved brain functioning, improved growth and earlier release from the hospital. In addition, their care was significantly less costly,” notes Galinsky.

She then concludes: “Children, even those as young as premature infants, are less prone to the harmful effects of stress when they are supported in managing their own stress by being helped to use the strategies they have for coping and for calming down.”

So, how do we understand and enable a child’s natural ability to self-soothe?

1. Believe babies are competent and capable whole people. Experts who have dedicated their lives to studying infants, Dr. Emmi Pikler, Magda Gerber, Dr. Kevin Nugent, and Alison Gopnik, to name a few, have concluded without reservation that even newborn babies are aware, competent, unique individuals.

A recent article in The Irish Times shares passages from Dr Nugent’s new guidebook for helping parents decode newborn communication: “A baby’s “remarkable ability” to get his hand or fist into his mouth -even when he is not hungry – is no random movement. He may do it when he is upset and then settle himself by sucking on it, enabling him to remain alert and examine his surroundings. By this simple act, “your baby is showing you how competent he is and how, even in these early days, the urge to explore his new world is paramount”.

2. Be an observer. Tune in. Learn about your baby. Familiarize yourself with your baby’s individual strengths and vulnerabilities. Try to read her cues and respond accordingly as best you can.

The role of a parent is to continuously assess whether the infant is capable of handling a situation.  For instance, when an infant looks at an object (or maybe reaches for it), many adults rush to hand the object to the infant – not realizing that, by doing so, they deprive the infant of acting spontaneously and learning from his own actions.  …You also know that sometimes your infant does need help, but try to provide just that little amount of help that allows the child to take over again. Let her be the initiator and problem solver. -Gerber

3. Wait. Therein lies the challenge. As singer songwriter Tom Petty said, “The waiting is the hardest part”, and that couldn’t be truer than it is while waiting a moment or two for a baby attempting to soothe herself.

Here’s a video of 4 month old Joey self-soothing, shared with me by her parents, whom I know to be sensitive, responsive and loving. Joey is a happy, securely attached toddler now. (There is a video of her at 15 months in A Creative Alternative To Baby TV Time.) I had planned to edit this video for time, but then realized that leaving it at 2 minutes made it feel more like real time – and just as uncomfortable to watch as it would be in real life. When our babies experience even the slightest frustration or discomfort, seconds can feel like hours (and no matter how old they are it doesn’t get easier!).

As I say so often, “Observe and wait.” Sometimes you may even find out that what you believed the infant wanted was only your assumption.  It is natural to make mistakes and easy to misunderstand pre-verbal children. Nevertheless, it is important to keep trying –Magda Gerber.

Being sensitive to the possibility of self-soothing is the beginning of believing in your baby.

Recognize that challenges and stress are a natural and important part of a baby’s growth. The ability to manage stress and muscle through challenges builds self-esteem and self-confidence. – Matthew Melmed, Executive Director, ZERO TO THREE.

Whether you agree or disagree, I’d love to hear your thoughts…

“Helping Children Learn To Take On Challenges”, by Ellen Galinsky, Mind in the Making

Dear Parent: Caring For Infants With Respect, by Magda Gerber

“Know Your Baby“, by Sheila Wayman, The Irish Times

“Your Baby Is Speaking To You“, by Lisa Sunbury, Regarding Baby 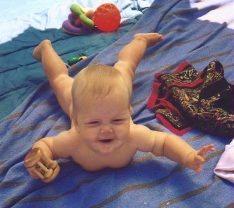