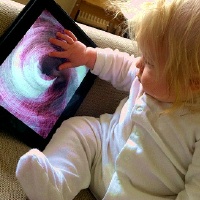 My partner and I wanted to get your knowledgeable advice…

Our daughter Maggie, who just turned 3, has not watched a minute of TV in her life…no movies, no computers…nothing.  We don’t even have toys that make noises or do things….strictly RIE!  As a result, she is a polite, mature beyond-her-age, confident three year old who loves books (yay!!) and creative play.   However, now that she’s older, we were discussing the idea of perhaps introducing her to the world of electronics (it’s inevitable!) by means of an educational game on an iPad.  It doesn’t sound like a big deal, but our fear is that we could undo all the work we’ve accomplished thus far.  Could she forsake all her books and real games for an electronic tablet? Are we nuts to think this?

You and your partner have done an incredibly wonderful thing by giving your daughter a screen-free first three years. This is huge. And, in my experience, you are almost entirely home free, because Maggie has had the opportunity to develop the habit of active play and self-entertainment, a love of books, an attentive, focused mind, listening skills, creative initiative, the list goes on… Kudos to you!

You aren’t “nuts” to worry about introducing electronics after all your hard work, because they can easily become a child’s focus. But gradually introducing some entertainment and technology won’t undo what you have accomplished (though I have a problem when electronics manufacturers label their products ‘educational’ and target them to parents of infants, toddlers and preschoolers. But that’s another post). The key is to set consistent limits and continue to do so. Then you’ll find, as we have, that your child can appreciate and utilize electronic media without it hindering healthy brain and body development.

Rather than leave the iPad out and available to her along with her other toys, I suggest offering it only at a specific time or times each day. This would probably not be first thing in the morning or any other time when she commonly has lots of mental and physical energy. My best recommendation is to save entertaining devices for late afternoons between nap and dinner time, weekend nights, long car rides and waiting rooms.

You will be opening up a can of worms in the sense that she is bound to want to use the iPad when you don’t want her to, and she probably won’t want to stop once she’s started. Say ‘no’ lightly but firmly and project the same confidence you do when setting other limits. And don’t forget to acknowledge, empathize with and accept her point-of-view, complaints and tears – just don’t let her sway you. (One reason I waited as long as possible to introduce my children to screens was my resistance to dealing with more of their resistance!)

“Yes, I know you want to use the iPad now and that’s very frustrating. You’ll have a chance to play with it after your nap.” Or, “It’s really hard to stop playing once you’ve started. I know. I’m sorry, but it’s time to put it away.”

An interesting thing you’ll notice (if you haven’t already) is that because you have raised Maggie to be sensitive and absorbent, her focus and retention will be remarkable. This will affect her ability to learn from the iPad and everything else. And since she wasn’t exposed to complicated toys and electronic gadgets as a baby, she has been encouraged to seek to understand her environment. TVs, computers, and toys that have buttons, make noises and do mysterious things tend to discourage active exploration, because they make no sense to a baby — are impossible to understand. Maggie’s ultra-awareness and self-motivated learning skills assure she’ll be an excellent learner throughout her school career and beyond.

Down the road this sensitivity, attentiveness and awareness may manifest in her being disturbed by what she sees in a movie or on television, because she hasn’t been exposed to the same volume of media as other children. You should be aware of this and know that she may continue to need some “protection” in this area. We’ve had to turn down several birthday party invitations over the years because they included screenings of movies that we worried would be too scary, violent or otherwise disturbing for our kids.

Meanwhile, Maggie’s friends and their parents may wonder why learning comes so easily and naturally to your daughter. Congratulate yourselves for fostering her sensitivity, attention span and higher learning skills, and keep up the great work!

P.S. Just after writing this post, a non-profit early childhood organization, 4C for Children, serendipitously pointed me to an ABC News story (Debate: Do iPads and Smartphones Really Teach Toddlers to Read?) that has me even more convinced that the iPAD should be considered an entertainment device rather than an educational tool. 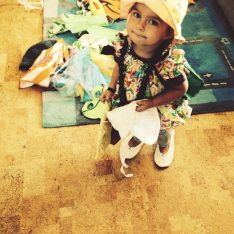 Help, My Toddler Can’t Play Without Me! 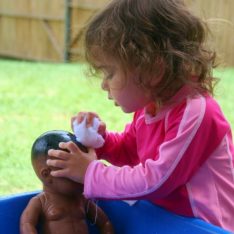 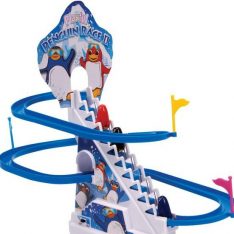