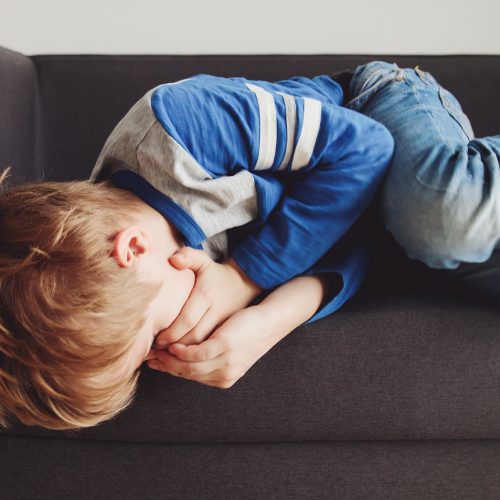 I was running late for my parent-infant and toddler classes, and the only available parking spot required me to move a resident’s trash bins a few inches. As I locked my car and started down the block, an elderly man suddenly appeared and confronted me. “Why did you move those?!” he growled, pointing toward the bins with his cane, his whole body vibrating with rage. He’d obviously seen me through his window.

I felt shame (a place I go easily), and that quickly turned to defensiveness and annoyance. He’s seriously going to yell at me for moving his trash cans 3 inches? But I was well aware that arguing in confrontations like these doesn’t get you anywhere. There’s no point trying to reason with a dysregulated person, child or adult. Besides, I had to get to work and was concerned he might do something destructive to my car if I ignored him and just walked off. I took a breath, swallowed my pride, and decided to do what I teach: just acknowledge.

“You really didn’t want me to move those! I’m sorry.”

I did not follow that up with, “Okay, I’ve acknowledged your side, but now see this my way.” I didn’t try to explain or defend myself. All I did was let him know I’d accepted his view as valid. No add-ons.

His tone instantly changed, and his hackles vanished. He started sharing with me. He told me how uncomfortable it was for him to have cars parked bumper-to-bumper in front of his home all the time (and I could relate to how claustrophobic that might feel). Given a receptive audience and a moment to express himself without judgment or pushback, he was able to eventually consider me. He asked where I worked. Turns out he knew someone in another office in that same building, so he asked me to say hi to her for him. I assured him that I would, and we said goodbye. The whole conversation took under two minutes.

Letting go of my opinion and pride to embrace his side of things was less painful and more invigorating than I had anticipated — as it always is, I suppose, but one forgets. In recent years, my experience with angry feelings is mostly in classes with other people’s toddlers. They’re so small and obviously blustery, and they seldom intimidate me. I get more concerned about the feelings of the parents when I’m holding a boundary with their child, but they always end up appreciating it. So, it was interesting and validating to see that I could do this with a grown-up. And the feeling I was left with was uplifting.  I’d lost nothing. I’d connected and made someone feel a little better. Best of all, I could teach for several hours in peace knowing that my car wasn’t likely to get scratched or towed.

Just acknowledge sounds so easy, but it can be the hardest thing to remember, and it means much more than just saying words. Our tone and subtext matter most, because people of all ages read between the lines. Our acceptance must be full and genuine for at least those few moments. We can’t be impatient or get annoyed. We can’t use our words as an analysis and attempt to tie a big tidy bow around a child’s feelings, talking at rather than with them. Nor can we use words as a tactic to try to make our child stop: “I understand you are upset… but let me re-explain my side of things.” Or, “I see you’re upset, but here’s why you needn’t be…” No, we have to mean it. We have to open the dam and give way to the feelings. That’s going to feel risky, but giving them room is the only way to help facilitate a positive change. And even then, it doesn’t always happen instantly. It can take time for the flood to subside, particularly if there’s been pushback from us in the past.

Nicole shared a story about her struggle to remember to just acknowledge:

“I wanted to share my experience today with the power of acknowledgment. Backstory first: We have a 7, 5 and 4-year-old. In June we began fostering twin 4-year-olds and a 2-year-old. As you’d imagine, it was quite an adjustment having 3 strangers come live with us 24/7. My 4-year-old has had the toughest time with the transition. This afternoon he lost a toy battle to one of our foster 4-year-olds.  This struggle occurred while we had a caseworker here for a visit, and the end result of the struggle was my son having a tantrum. Typically, I’m unfazed by tantrums, and I’m rarely embarrassed by them. Today though, the fear of being judged (by the social worker) took over and made me a bit frazzled, and I admittedly did not do the best job of handling the situation. I rushed through dealing with the tantrum. I just wanted it to end so we didn’t look bad, plus I was in the middle of an important conversation with the caseworker that I was anxious to continue. So I sent him to his room by himself, telling him he could come out when he was done screaming and hitting, then went back to my conversation.

A few minutes later my son quit his tantrum and came back out calm. I chalked that up to a “win” for me and went on with my day forgetting all about it. At dinner another full blown tantrum hit. This time I took him to his room and sat with him. I said it seemed like he was having a hard time and asked if he wanted to talk about it. He said he wanted that dinosaur (the toy from before). At that point I realized he had been more subtly struggling with his behavior ever since the incident. I had forgotten all about it, but he sure hadn’t!! Instead of simply acknowledging, I went on to say, “I know, but she had it first…” to which he replied angrily, “She shouldn’t even be here!”

I was a little taken aback by that statement and asked what he meant. He responded, “This isn’t even her house! Why can’t she go live with her mom?”

Again, instead of acknowledging, I tried to reason and explain… “Well, she can’t live with her mom right now. It’s not a safe place for her at this moment…If she goes back home she could get really hurt. Don’t you think we should let her stay here so she has a safe place to live?”

He responded, “No! She should live somewhere else.”

After several minutes of this back and forth, I realized I had failed to acknowledge. I started over. “Wow, you’re still upset about that dinosaur. You really wanted it right then. It must be hard to have these new kids come live with us and to have more people to share your toys with. It sounds like you don’t like her living here right now.”

The anger on his face melted instantly and he replied, “No, I like them living with us. That dinosaur is mine, but she can have it.”

Then he gave me a hug, hopped up and had a good rest of the evening.

I’m still fairly new to this approach to parenting, and I sometimes struggle to get it right, but I’m always really happy with the connections made and the understandings reached in the moments I do get it right.”

Children Hurting Themselves When They’re Upset 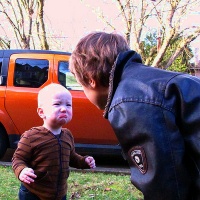 The Instant Gratification Every Child Needs