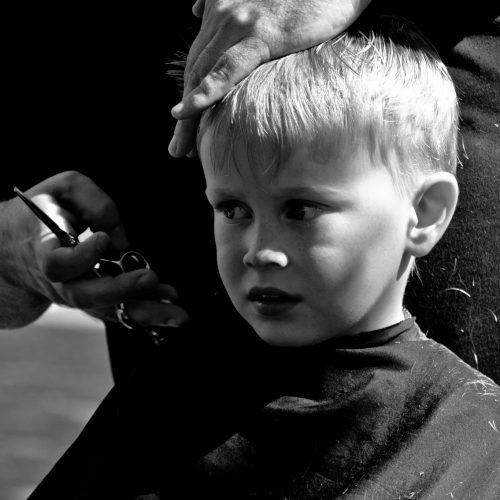 Haircuts for children tend to have one thing in common: distraction. In the interest of getting kids to cooperate while we get the job done, distracting them with toys, games, screens and other entertainment can seem the best solution. It seems kinder, too. What kid would want to sit still for several minutes while a stranger goes at them with shears?

But there’s a much better way, and it’s the polar opposite of distraction: involvement. When we honestly and openly involve our children in tedious or (perhaps) disconcerting activities like haircuts, they learn:

To be present, focused, and aware rather than disengaged, which is particularly crucial with activities that directly involve their bodies and personal space

That we respect them as valuable people who deserve to be informed, active participants in their lives

To notice and take interest in detail

That their input, feelings and opinions are important

How to use scissors and cut hair (though I guess that one could backfire if they decided to take matters into their own hands!)

That haircuts, like any aspect of a life that is new to them, can be intriguing and even exciting

Here’s what happened when Michaela decided to invite her son’s involvement in getting his haircut:

Hi Janet, I want to share a success story. My 3 year old son, L, has a severe speech delay. He really doesn’t speak at all yet, but he understands everything. It is easy to treat him like a baby because he is pre-verbal. Lately, I have been focusing on making a point of speaking to him about complex situations and ideas, about past events, future plans and other abstract things we can’t see and point to. Essentially, I have been treating him as if he does speak, because I can see that his mind is there.

The last time he had a haircut (a few months back), we went to one of those kiddie places where he sits in a toy car while the hair dressers do all they can to distract him from the hair cutting with video screens and toys. He quickly grew tired of those things and then went into full meltdown mode over being touched. The haircut ended up messy in more ways than one.

So this time we took him to the proper men’s barber around the corner where his daddy goes. I decided it will be fine if I could be fine about it, and if the barber wasn’t spacey like they were at the kiddie place. We walked by each day for a few days, and I showed him through the window people getting their haircuts. We also talked to the barber, who seemed great with kids. L liked him so much that he let him touch his hair. So, I made an appointment. A few days before the cut I explained the whole process to him: that he would go in and sit like daddy, and the barber would use scissors — like the ones he uses for cutting paper — to cut his hair. And a buzzer, too.

The day of, I showed him a YouTube video of a toddler getting a haircut. That afternoon before going I said, “We are going to get your hair cut now,” and my boy enthusiastically pointed to his head and made the scissoring gesture with his little fingers. He was excited!

We went to the shop with his little brother in tow as my husband got delayed at work. The barber was running behind. Both boys sat there patiently for 45 minutes and waited. L chose to wait in an empty chair next to the barber’s station. Little brother ran his toy train up and down the bench. When his turn came, L refused the cover because he felt too hot, so the barber cut his hair without it. L sat there patiently and happily.

I feel like haircuts will be special occasions from now on, to be enjoyed rather than feared. Thanks for the guidance on having faith in our kids’ capacity to focus and be the actor, not a victim of things done to them.

“That’s wonderful, Michaela! This was the key to everything: ‘I decided it will be fine if I am fine about it.’ Plus, the fact that you prepared him so beautifully! Our children’s success begins with our belief in them.”

I just realize more and more how well this approach works. My son (2 ½) went for his first haircut yesterday. I have been telling him for days what to expect, why he has to go, and in detail what will happen when we are there. He was an angel! Everyone in the salon commented on “how well behaved” he is — and he is usually a VERY active, busy boy! The only time he moved was to inspect the little hairs on his hands, which were fascinating to him.

Respect works and will show our kids to be more capable and knowing than we ever imagined.

Thanks to Heila and Micheala for sharing their stories and photos!

I share more about respect and cooperation in No Bad Kids: Toddler Discipline Without Shame 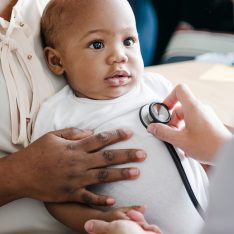 This May Hurt (Why Some Kids Like Doctors, Dentists and Haircuts) 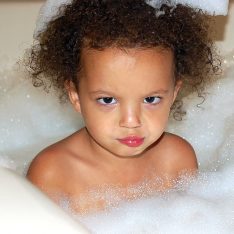 Putting an End to Power Struggles with Our Kids 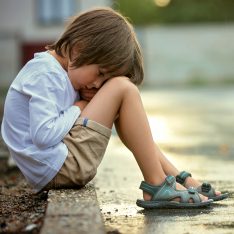 Building Trust with Kids in Crisis (A Police Officer’s Story)