I have got myself and my toddler into a bit of a bad habit. K. is now 27 months old, and on the whole pretty wonderful! (I could talk about him all day long!) But he really likes watching TV (which is my fault), and I totally know this is not good for him, and am not trying to make excuses for it!

It mainly started when I got pregnant again just over 3 months ago, I was hit really bad with morning sickness and tiredness, having days on end when I was vomiting everything I ate and often every time I got up from a resting position. I felt really helpless, as much as K. is pretty good with his independent play, me needing to lie down or rest hours on end between running to the bathroom proved too much for me and him (it also coincided with him deciding he no longer wanted to nap in the afternoon, though I know he still needed it – which is a whole other issue) so I resorted to TV during the worst times. I did try to choose the ‘best’ or least hectic TV I could, but now I am starting to feel better (have had 5/7 sickness free days this week!) it has become a bit of a habit which I am really struggling to break! We had already let TV slip into his day a few months early when he starting waking at about 5:30am, and I struggled not to just want to sleep on the couch with him while he watched some TV…

I have a couple of thoughts about the TV use. First, it’s totally understandable, especially given your situation. BUT, this is also well within your power to change if you want to. Remember, you are in charge here.

The way I’ve always looked at these tough changes is: I have to be the very best mom for such an incredibly wonderful boy, so I’m going to face these seemingly impossible tasks with conviction.

Conviction, resolve, fearlessness — whatever you want to call it — is the most important thing by far, because without that, K. doesn’t have a prayer of accepting your limits and moving on.  My experience (personally and with the parents I’ve worked with) is that these things are much easier to change than we expect them to be, but only if we have resolve.

If we come from a place of confidence in our decision, our child will probably still object strongly for a bit, but underneath that there will be a lot of relief. “Mommy’s got my back. She took charge.” And even, “She cared enough to do something that was very hard for her. She’s my confident leader.”

Whether or not you decide to cut out TV entirely, do it cold turkey or in stages, I would get rid of the morning viewing time immediately, because that one is akin to shooting yourself in the foot.  Watching TV changes brain waves, dulls and slows the mind. Expecting K. to start his day in a stupor and then snap out of it and play productively is not reasonable.  I understand why 5:30 may seem too early for you, but this is probably prime time for K. in terms of his energy…and that energy is being zapped by the tube, setting the tone for the whole day. School teachers can attest to this, since they are the ones who commonly deal with children coming to school like zombies after watching TV at breakfast time.

Parents of preschoolers have asked me why it’s such a struggle to get their children out the door, and then it turns out that the child is watching TV first thing in the morning. Granted, it’s hard for us to recognize this because we are not nearly as sensitive to the effects of TV as our young children are.

But I don’t want to make you feel guilty! I really don’t know why this information isn’t more widely disseminated.

So, tell K. the night before what the routine will be for the morning. Give him the blow by blow with as many details as you can. This is the way to help K. feel participatory in this change in his life. Acknowledge the change and that you realize how much he likes his TV show…and you know that he will miss it. Tell him that after you give him his breakfast (together…remember that care-giving times need to be times of connection), he will get to either play or help you clean up, or watch you clean up, etc., as you wish. (You might want to offer a special “mornings only” play material like playdough.) Keep him fully informed in advance.

Then, when the time comes and he screams or cries (if he even does those things), acknowledge how hard it all is and how much he misses seeing the show. Be available for cuddles if he wants them. Don’t talk him out of his feelings or try to get him to feel better, just keep acknowledging the truth. (I know this is challenging and very counter-intuitive, but it’s really important).

Remember that K. probably has lots of jumbled up feelings right now. He’s feeling the stress you are feeling regarding your pregnancy. Whether or not he knows much about the meaning of the pregnancy, he senses tension, which is likely making him anxious and uneasy. Crying about TV will be a great excuse for him to get some of these feelings out. Tell yourself this again and again, because it’s true.

Every time he brings it up, acknowledge, “Yes, you used to do that, but I can’t let you do things that aren’t good for your brain and body anymore. You’re too special. I made a mistake.”

P.S. TV and his resistance to napping might well be related. Even though TV has a mind-numbing effect, studies show that it might interfere with healthy sleep. Imagine a tiny, sensitive person passively absorbing all of that stimulation.

Endangered Minds: Why Children Don’t Think and What We Can do About it, Jane Healy, PhD

What Does TV Do To My Kid’s Brain? by Wendy Sue Swanson, MD, MBE  (featuring an enlightening TED talk by Dr. Dimitri Christakis of Seattle Children’s Hospital)

A Creative Alternative To Baby TV Time (on this blog)

When Your Kids Won’t Give You a Break 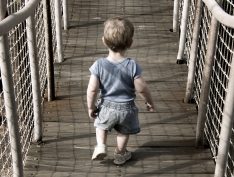