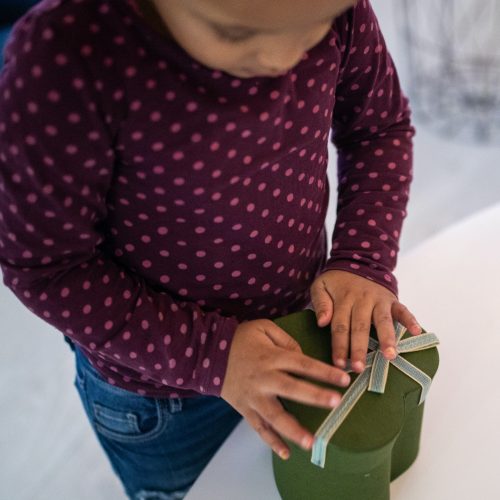 My son is 28 months, and this is the first year I think he’ll have a lot of questions about Christmas.  My parents are already asking what Santa should bring him, and it’s prompted me to think about how I might position this mythical character in a developmentally appropriate way that embraces the spirit of Santa, doesn’t feel like I’m lying to him or that I will have to burst his bubble later!  I’d also love to know if you know of any books that illustrate what you recommend.  He’s SO into books lately, and we found a very cute book about Halloween that I think really helped him and us.

I’d love to know your thoughts on this!

Many thanks and keep up the amazing work!

I would frame Santa as a magical, mythical character. Yes, as the legend goes, Santa lives at the North Pole, drives a sleigh with flying reindeer and sometimes brings gifts, but who can be sure? No one’s ever seen him, and we never know for certain if he’ll come. Those bearded guys in the mall are just nice men pretending (or Santa’s helpers). And you don’t have to sit on Santa’s lap if you don’t want to.

Keeping Santa a fluid, evolving fantasy is more honest and less scary for toddlers than the reality of a home invader jumping down the chimney in the middle of the night in big black boots. (One of my nephews was terrified of the big guy he called “Ho Ho”.)

Others might disagree, but I don’t believe encouraging fantasy and holiday magic conflicts with an honest relationship with our children. I don’t remember ever feeling my “bubble burst” as a child, only more appreciation for my parents’ generosity. I believe my older children, now 18 and 13, had a similar “transition”, and my 9 year old just made a letter for Santa. None of them has ever questioned details or asked for proof. Maybe they’re too smart for that.  Why question magic, joy and gifts?

Share your memorable childhood experiences. Some of my favorites are the silly things that happened while caroling every Christmas Eve with the neighborhood children; or the way, in our eager anticipation of  Christmas day, we’d push the walls inside our house to make the world turn faster (now I’m pushing in the opposite direction to make it slow down).  Holidays are an opportunity to share what we loved with our children, relive memories and make new traditions, the richest of which will be the ones created together spontaneously.

For Christians, Jesus’ birth is the magical story to share, and it was at least as captivating for my toddlers as the Santa story, if not more so. They loved the music (and still do), sang along with the hymns and played angels and manger animals in the church pageant. For us, making the effort to focus on the true meaning of the Christmas holiday was important and provided balance for all the Santa festivities.

Here are a few more thoughts about enriching the holiday experience (or any experience) for toddlers:

I’m so glad you brought up books.  Reading books and telling stories are terrific ways to involve our toddlers in new events and occasions, because they help them know what to expect. If there’s one thing Girl Scouts and toddlers have in common it’s the wish to be prepared, since through a toddler’s eyes the world is new and thrilling, but also a little overwhelming. In a big, mysterious world full of unknowns, toddlers like to know. Prepped for events with books and our detailed descriptions, they can feel a little on top of things and embrace experiences more fully.

So, I would definitely show your son books and tell him all about your plans around Christmas. My favorite Santa books are classics that capture the Christmas spirit:

The Night Before Christmas

How the Grinch Stole Christmas

Toddlers want to do things themselves, and when we slow down and prioritize their active participation, the holidays can belong to them, too. This means keeping an eye out for things toddlers can do, or at least try to do. It means letting go of results and preconceived notions, allowing all the ornaments to be clumped in a foot long section at the bottom of the tree, not minding it when grandma hears all about her new bedroom slippers beforehand (because our toddler helped us wrap them), realizing that other things we thought mattered really don’t.  And don’t even bother asking a child under the age of 10 not to throw tinsel.

Toddlers can place money in the Salvation Army tin and drop gifts into the Toys for Tots bins (although it’s easier if it’s not a toy they would like.) Toddlers can also help come up with gift ideas for people they know…and will get a kick out of seeing them opened.

Toddlers love to make stuff. We’re blessed to have lots of beautiful ornaments, including expensive gifts and family heirlooms, but my all time favorite is one my daughter made at preschool when she’d just turned 3 (See photo). I had already been planning to share about it here, and then while we were all decorating the tree recently, I was surprised to hear her exclaim, “It survived another year!” as she hung it on a low branch. 15 years later, I guess it’s still special to her, too. 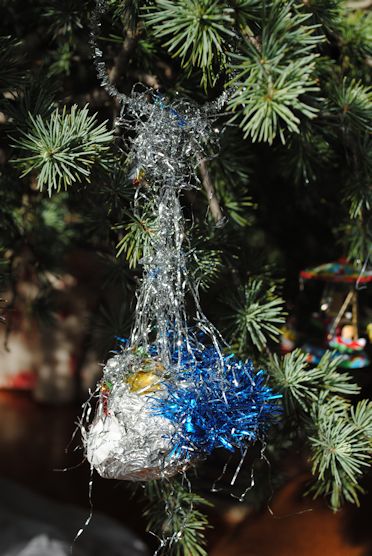 Ho, ho, ho, can’t even pretend to know much about this. Even though “do less, enjoy more” (à la Magda Gerber) is my usual mantra, and I’m well aware that toddlers are sensitive and absorb our moods, I have never figured out how to avoid becoming possessed by  Christmas holiday madness. So, here are a couple of posts I’ll be turning to for inspiration to change my stressed, obsessed holiday ways:

The Holiday Season: Putting The Genie Back In the Bottle by Kim John Payne

I’ll only add one thought…one that you probably already know: toddlers play longer with simple toys that they can be creative with and actively explore. (I share specific recommendations HERE.) A set of blocks, a basket of balls, a box of stones (but not ones they can choke on), even a lump of coal can be just as intriguing as an electric train set.  And the gift they treasure most is the attention of their loved ones.

Do you have favorite holiday books, music, ideas for toddlers? Please share! 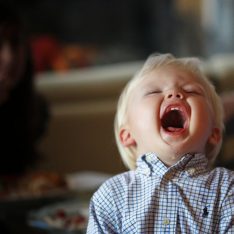 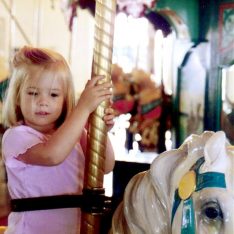 Toddler Readiness – The Beauty of Waiting