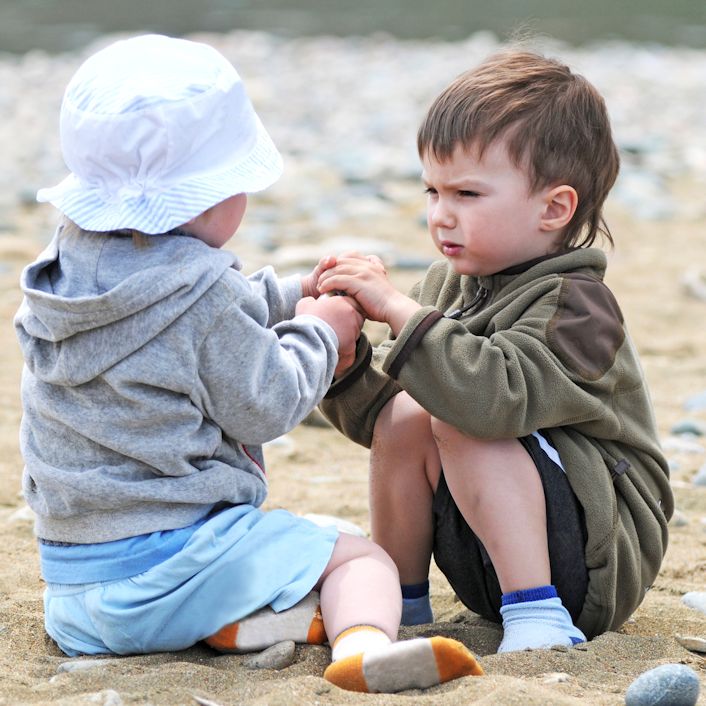 Given a choice, I would avoid conflict like the plague, but I don’t live in a plastic bubble. My day is full of personal interactions with family, friends, co-workers and strangers (including the telemarketer predictably calling at dinnertime). As a result, I find that I constantly need to exercise and hone my “handling conflict” skills.

Thankfully, I’m blessed with the most inspiring teachers in the world: the infants and toddlers in my classes. If I were half as willing and able to face conflicts directly and work through them as these little ones do, I’d be fine.

How do we learn to resolve conflicts? Our biggest influences in both our attitude and response are our parents (no surprise there). As our primary role models, we learned by observing them deal with their own conflicts, and most profoundly by their interactions with us. These core lessons, instilled early on, become part of our psyche and can overrule everything we absorb intellectually later in life.

We also develop our conflict skills through early interactions with siblings and peers. Through trial and error we discover how to achieve the desired results, which might be expressing our feelings or defining personal boundaries without severing our connection to the people involved (unless they’re telemarketers).

Conflict resolution is an art rather than a science, because each situation presents so many unique variables. Each individual’s temperament, perceptions, baggage, etc. all come into play. Should we hash it out? Insist? Give in? Or just walk away? There’s no one-size-fits-all approach.

So we can all use as much practice as we can get, especially young children. Beyond exposing our children to everyday social situations — play dates and trips to the park — how can we help children learn to manage and resolve conflict?

In short, by allowing them to experience it with our support. Providing this support means learning when and how to intervene. Here are some of my intervention do’s and don’ts:

1. Don’t resolve conflicts for them

It’s a big challenge to let go of our adult wish to tie a neat bow around our children’s disagreements and avoid their emotional outbursts. But our interventions can prevent children from learning much of anything other than that they are dependent on us to fix these situations, incapable of handling conflicts themselves.

Resolving it for them includes demanding that toddlers share or take turns, as well as offering ideas and suggestions like, “How about you both hold onto the pail and carry it together? There you go!”

The challenge for parents is to allow children to safely engage in conflict and resolve it their way, rather than letting our discomfort or impatience get the better of us. The more we say and do for our children in these situations, the less they will learn to handle themselves. Trust and patience must precede learning.

Some misinterpret “respectful discipline” as simply telling children not to hit, bite, etc., rather than physically intervening. Children need both. They need us to be ready to prevent these harmful behaviors if possible, blocking or holding children’s hands and calmly shadowing children who have demonstrated these behaviors in the past (or seem in an out-of-sorts mood that day).

3. Don’t shame or lecture by pointing out the obvious

One of our goals should be to help children build confidence to deal with conflicts, but much of the expert advice commonly given strips confidence away. A friend shared this exchange she’d had with her toddler’s prospective teacher:

When I asked what the teacher does when there’s conflict, she said something along these lines of, “I show the child – look at John’s face, he is hurt, do you see how he looks? Do you see how your actions hurt John?”

As I told my friend, this type of response is one of my pet peeves. It’s heavy-handed, shaming and underestimates our children’s awareness. Kids are even more sensitive than we are, and beginning at birth it is next to impossible for them not to register the feelings of those around them. Hitting or pushing has much less to do with “John”, much more to do with what’s going on inside the “perpetrator”.  Generally, these are momentary impulses beyond a young child’s control, and our job is to help toddlers with these impulses, not rub their noses in the consequences of their actions.

4. Don’t speak in exclamation points, use an angry tone or expression

Again, this creates shame, erodes confidence and fuels the undesirable behavior by giving it negative attention.

Which brings me to the do’s…

3. Protect children by preventing hitting, pushing or repetitive toy taking calmly and confidently, and shadow a child who seems to be having a difficult day.

If children seem to be caught in a pattern of hitting, biting, pushing (or other limit-pushing behavior), they need our help and protection, not our scolding.  They might be:

Seeking the firm limits they are not getting at home

Feeling over-excited, overstimulated, out of control

If we don’t catch the behavior in time to prevent it, firmly and matter-of-factly remind the child, “You want that toy, but I won’t let you hit” or “I don’t want you to hit.” Leave it at that.

4. Let infants and toddlers take toys, because this is on their short list of “playing together” possibilities.  Only intervene to protect an older toddler’s more elaborate projects or when a child seems stuck in a pattern of toy taking. (For more on this, please read What to Do About A Toddler Toy Taker.)

5. Keep an open mind – This means allowing children to do it their way, which will be different from our way most of the time. Trust is our biggest challenge.

6. Wait rather than putting a time limit on conflict, even if it seems intense. If no one’s getting hurt, it is healthy for children to release these feelings.

Kate from Peaceful Parents, Confident Kids shared this brilliant example of patience and trust paying off… (Lucy, 2.5, and Penny, 1.5, are sisters)

I put your advice into action on a car trip this afternoon. Penny was playing with a toy turtle that Lucy had happened to bring on the trip in the first place. Lucy noticed and shouted, “that’s my turtle, give it to me!” Penny looked at her momentarily and then continued to play with it.

I said to Lucy, ‘You really want that turtle, Lucy.” And then to Penny: “You’re still playing with the turtle”, and then silence. I wanted them to process.

After about 20 secs, Lucy, then in a much calmer voice said, “Please, Penny, can I have the turtle”. Penny still continued to play with the turtle. So I stated: “You’re still playing with the turtle, Penny”.

Silence again for about 30 secs, then Penny began mouthing the turtle and Lucy started getting a little agitated again and with a raised voice said, “Don’t eat the turtle, Penny!”

I then said, “You don’t want Penny to eat the turtle, Lucy.”

She said (much calmer), “No!” and then added a little later, “Just pretend.”

Then silence for another 30 secs or so, and then an ecstatic voice: “Penny, gave me the turtle!”

I looked back, and sure enough Lucy had the turtle and all was peaceful!

Could NOT Forcing a Toddler to Share Help With Sharing Conflicts? by Kate Russell, Peaceful Parents, Confident Kids

Siblings Without Rivalry by Faber and Mazlish

5 Benefits of Sportscasting Your Child’s Struggles, The S Word – Toddlers Learning To Share and The Baby Social Scene – 5 Hints for Creating Safe and Joyful Playgroups on this blog

These Toddlers Are NOT Sharing 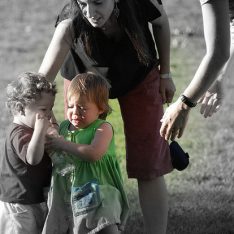 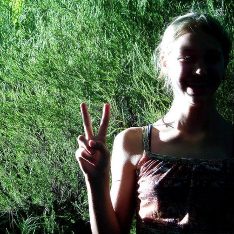 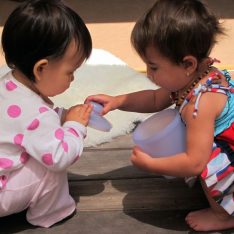 Helping Toddlers Succeed (at the Park, Playdates, Outings, and Other Social Situations)