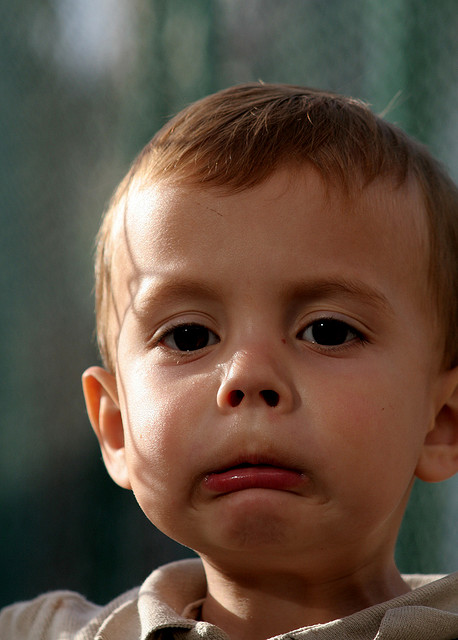 Stepping into our children’s shoes (or booties) in order to see their point-of-view helps us to empathize, meet their needs, foster healthy self-worth and a secure attachment.

Sensitive observation and reminding ourselves to wait a moment before intervening are effective ways to do that, and sometimes the insights we gather are reinforced by adult experiences that demonstrate to us first-hand the way kids are commonly treated. Helene shared such a story:

I wanted to share this experience with someone who would understand fully what I mean: you!

I’ve been participating in a morning workout (bootcamp) for the past few weeks. A group of regulars get together in a park, and our trainer J, a low key guy in his late 20’s, has us do laps, squats, push-ups and the like. He doesn’t talk a lot, just gives simple, clear instructions, makes a few comments throughout to correct someone’s form, but keeps it matter-of-fact. In terms of encouragement, he’ll offer a “hang in there” from time to time, and at the end he tells us to give ourselves a round of applause. That’s about it.

I don’t think that 20-something guy would imagine he’d be a great parenting model, but he is, and it’s something I only realized in his absence…

The other day, J was sick, and we had a sub, a young woman, early 30s, with a very different style. As we walked up at 6am, she started by telling us she wanted us to work as a team and had us introduce ourselves to each other and shake hands. Then, as we proceeded with the exercises, she would repeat “come on” and “good job” every few seconds. At the end of every single exercise as we recuperated, she would remind us to “hydrate”.

She kept trying to get some enthusiasm out of us, “how are you feeling guys?”, “you’re doing awesome”. She also kept differentiating between the “advanced people” who could do an exercise one way, and the “others” who could do it another way.

When she went as far as singling out one of the participants by saying, “See how well he’s doing, he’s almost done, come on guys”, I thought to myself: “That’s it! What are we, toddlers?”

And there’s the rub. I immediately thought of RIE and of the struggle I’ve had with some relatives and other adults being relentlessly “on” my son at the park or while playing at home. Basically, they talk and interact with him exactly like this woman.

Thanks to RIE, your blog and recommendations, I have seen the immense value of standing back and letting my son do his thing without these constant interruptions. The other day, I really felt like I was in a toddler’s shoes, and the only thing I wanted to say to that woman was to go fly a kite (or something less polite).

And I’m sure that’s how a lot of toddlers must feel when they’re patronized in this way, forced to “socialize”, congratulated for the simplest tasks, taught a “valuable lesson” at every opportunity, compared to others, and expected to perform to make adults feel good about themselves for being “good teachers”.

Being used to RIE’s respectful approach to parenting, I’ve noticed my son has grown quite “allergic” to this type of intervention from an adult. He has already learned to set his boundary when other adults (grandparents for example) try to tell him what to do at the park, or do something for him, or grab him without warning. He will often send them away with a vehement “Noooo”.

Ok, I wish he said it in a nicer voice, but deep down, I’m really happy that he can set his boundaries in this way.

So from now on, every time I might be tempted to intervene or be a little too invasive with my son at the playground or elsewhere, I will remember my trainer J and his annoying sub…

Have a wonderful weekend Janet, thanks for letting me share.

Helene is the French mom of two-year-old Pablo, living in Los Angeles. Her blog, French Foodie Baby, chronicles her journey in the nurturing and expanding of her son’s tastebuds and love of life through good food. It includes baby and family cuisine recipes as well as musings on parenting, cooking, and the many life lessons learned in the kitchen and at the table. 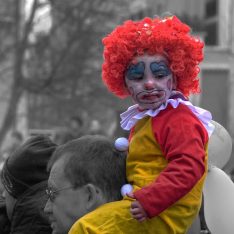 The Happiest Kids Don’t Have To Smile 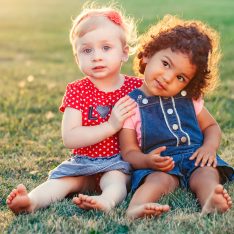 Teaching Our Children Consent and How to Give Affection With Respect 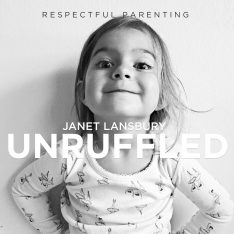 Challenging Moments With Kids: How To Keep Your Cool (with Psychotherapist Tasha Lansbury)