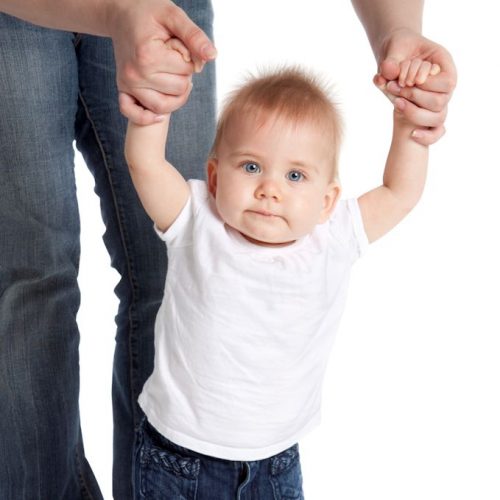 An infant sits stiffly on the floor, unable to move his legs or extend his arms without losing his balance… A toddler steps off a platform and takes a tumble… Another toddler climbs the bars to the top of a wooden structure, then panics and cries out for his mom, who rushes over to rescue him…

These are children who are less physically self-assured than they might be for one simple reason: their motor skills are not being allowed to develop naturally.

Infant expert Magda Gerber, the founder of RIE, advised parents to trust infants to do what their body is able to do, and to give children time to achieve the next physical milestone when they are ready, without adult interference. Unfortunately, this central tenet of the RIE approach to child care runs counter to society’s conventional wisdom. Doctors, friends and neighbors inadvertently make us feel that our child’s motor skills must advance as quickly as possible. They ask if our child is sitting, crawling, standing or walking yet, and we worry that there may be something terribly wrong if the answer is ‘no.’

Parents should relax in the knowledge that each infant’s development is directed by his unique inborn timetable. Infants will always do what they are capable of doing and are naturally wired to advance their physical abilities independently. They never hold back. An infant who is given ample opportunity to move freely on his back will discover ‘tummy time’ on his own. Eventually he learns to roll to his back again. He then progresses to crawling, creeping, sitting, standing, climbing, walking, running and jumping, all without the need for parental prompting, propping or other intrusion. As Magda Gerber said: “Readiness is when they do it.”

There are countless benefits to giving a child ownership over the pace of her gross motor development. For one, she gains self-assurance, because each new skill is initiated and engineered by the child. The child will instinctively work to develop the muscle strength, flexibility and balance needed to achieve the next step. These children advance with a keen awareness of their physical capabilities. Magda Gerber reminded parents, “Earlier does not mean better.” She taught caregivers to appreciate the quality of a child’s movements, rather than rushing the speed of development.

Having observed infants for years, I can usually distinguish a toddler who was allowed to achieve his mobility freely from a child who was not. Magda Gerber was able to perceive these differences even in older children. Several years ago I met a young teacher named Leslie at a RIE conference who shared an account of Magda’s observational abilities during a visit to Leslie’s preschool. Some of the students at the school had been cared for in an infant center associated with RIE. To Leslie’s amazement, Magda was able to identify these children on the playground. Magda said that she recognized the RIE children by their agility and poise. Astounded, Leslie was compelled to attend the conference to learn more.

There is also a practical reason to permit infants to develop their abilities naturally: physical safety. ‘Safety’ is a word that attracts parents’ attention, and a child who develops his motor skills independently is much safer than one who is helped to sit, stand, or walk, held by the hand while going up or down stairs, or placed on a slide or climbing structure. Children will naturally seek balance, but when parents ‘help’, they give a false illusion of physical competence that can literally be dangerous.

My husband Mike encountered this brand of danger ‘head on’ when his friend, Joe, dropped by with his eighteen-month-old son Colin. The two dads talked for a while on our front porch, then Joe went inside to use the bathroom. Mike stood beside Colin, who was walking towards the brick steps leading to the lawn. Having raised three children who would never attempt to walk down steep steps at that stage (but might crawl down, or find some other way), Mike was blindsided by what happened next.

In a flash, Colin made a move to walk down the steps without even a gesture towards Mike’s available hand! He took a header, and when Joe returned a moment later he found his son in tears and sporting a trophy-sized, egg-shaped lump expanding on his forehead. Of course, Mike felt terrible (and his baby-sitting career was finished), but Colin’s parents contributed to this incident by habitually assisting him when he took steps. ‘Helping’ Colin along rather than allowing him to find his balance and his own safe methods of mobility put him in danger, because it gave him an inflated sense of his physical ability.

This false sense of security is learned when adults place children atop ledges, slides, climbing structures, giant boulders, or almost anything, and then help them to get down again. The child may believe he can get down by himself (after all, it was easy enough to get up), or he might reach out, expecting to be helped, and end up falling. The general rule is this: if a child can climb up by himself, he should be relatively safe climbing down again, and the child should be given the opportunity to practice both maneuvers. The adult should stay close and ‘spot,’ but not touch or help the child.

If a child is stuck in a place that he has climbed to himself, the best way to proceed is to talk him through getting unstuck in a soothing voice, or take the smallest possible action to help. (For example: helping a child to un-wedge his leg from between two bars so that he can then climb down.) The child who is allowed to work through the problem as autonomously as possible will learn the most from the experience. Quite often, the child who has had a frustrating and difficult time getting down from the climbing structure in my class will then immediately climb up to attempt it again.

There is joy in observing a child persevering to overcome physical challenges and discovering and mastering new forms of mobility. In my RIE parenting class, seven-month-old Bianca spends much of the time in side-splits and has a flexible, spread-eagle style when maneuvering around the room. Jason lies on his back and does leg-lifts and torso lifts that any Pilates teacher would envy. Audrey crawls agilely down a set of wooden steps head first. Alex walks down a ramp, trips, falls and gets up again. Sophie climbs into a wooden box and struggles to climb back out. She finally gets out by placing her hand on my shoulder as I crouch next to her. Predictably, she climbs back into the box.

These self-initiated learning experiences are infinitely more beneficial to a child’s development than a parent’s efforts to ‘teach.’ After all, if we look to the animal kingdom for models of the physical abilities we most admire — do gazelles, leopards and monkeys need to be taught how to move?

A trusted child “learns to do something on his own, to be interested, to try out, to experiment. He learns to overcome difficulties. He comes to know the joy and satisfaction that is derived from his success, the result of his patience and perseverance.” – Dr. Emmi Pikler, Peaceful Babies – Contented Mothers.

My book, Elevating Child Care: A Guide to Respectful Parenting  (available on Audio)

See How They Move, featuring Magda Gerber, by Resources for Infant Educarers

“No Tummy Time Necessary” by Lisa Sunbury, Regarding Baby

“Set Me Free”, “Messing With Mother Nature” and “9 Reasons Not To Walk Babies” (on this blog) 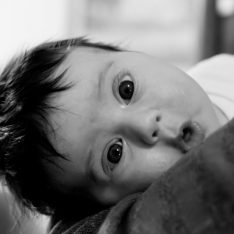 Would You Let Your Baby Do This? 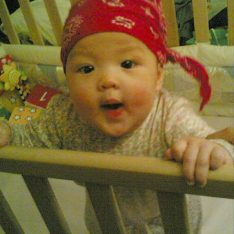 Baby Takes A Stand Against Sleep (Advice from Eileen Henry)