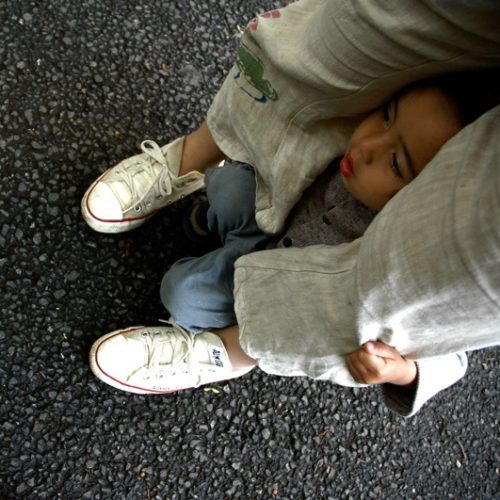 It’s a well-known fact in my family that I startle easily. My husband and kids are often met with a gasp or shriek if they walk into a room unannounced, or even address me from a direction that I’m not facing. I’ve been known to leave the ground. Sometimes, if I’m deep in thought, the slightest movement (real or imagined) in my peripheral vision can set me off.  I’ve been startled by my own eyeball floaters.

These reactions and over-reactions are geeky and odd, for sure, but they have nothing to do with me literally being afraid. As a child, I don’t remember feeling particularly fearful or fragile, but I appeared that way because I was sensitive, pensive, cautious. I cried easily and often. My vulnerability created problems because it made my parents feel a little sorry and afraid for me. Naturally, they were protective, which wasn’t a good set-up for me to believe in myself as a strong, self-confident person.

All that said, the note Melaine shared with me struck a nerve.

I have a two and a half year old son and am wondering how I can guide him to be less shy and less fearful.

I’ve read both of your books (some parts multiple times), and I love the respectful, patient and consistent philosophy of parenting. It really seems to work well for my son so far — tantrums are mostly under control, and he follows direction pretty well.

One thing I have not yet been able to improve on is his cautious/shy/fearful personality. He is most comfortable with me and my husband, and then his four grandparents. Around us, he is very talkative, social, and FUNNY! Around everybody else, he really goes into a shell. Till about age two, he would cry when someone (other than parents or grandparents) approached him to carry him. Now he doesn’t cry anymore, but he won’t let anyone carry him.

He also speaks about 10% of his typical speaking around ‘strangers’. Definitely not the funny guy he is around me. He does eventually warm up, but that takes a couple of hours (and even then, he will probably be 25% of his typical self). He dislikes when people approach him. He prefers to be the one to approach others. I take him to My Gym and Wondertree classes and around other kids. He lets kids go past him for the slide and never ‘fights’ for a toy (he will give his toy if another kid wants it). He will go around the crowd (instead of through the crowd of kids) to put away things. He will also say he’s scared when people are acting out dinosaurs or other loud animals or loud scenarios. He won’t tell people “hi” and sometimes will say “bye.” He used to do high fives but not anymore.

Again, with me, my husband and his grandparents, he acts tough, silly, energetic and is a chatterbox. I’m not worried about his physical strength or his intellect. Just wondering how I can gently guide him to be less shy and fearful.

Sensitive children can be the most misunderstood. Their openness is mistaken for weakness. Their caution and reactiveness are seen as fear. Their thoughtfulness and awareness are perceived as reticence, and their introversion as lacking in social skill and self-confidence. They’re regarded as needy and deficient rather than innately blessed with an excess of perceptiveness, learning abilities, empathy, and intuition.

But please don’t take this as judgment or blame!  Parents’ concerns and misreads are perfectly understandable and come from the most loving, caring place. Ultimately, though, they do sensitive, “shy” children a disservice. Here’s why:

In these early impressionable years, children tend to believe whatever their parents see in them. For instance, if parents see their child’s silence when approached by a stranger as fear, the child can begin to feel less capable and more uncertain in those situations. Labeling children as shy can only make them feel even more self-conscious and tentative. Sensitive children tend to retreat further when they sense parents trying to force or coax them out of themselves and into more assertive behavior. When we react out of fear as parents, we are never going to have a positive, encouraging effect.  The only way to do that is to calm ourselves so that we can take the path of trust.

I would trust this, Melaine: “Around us, he is very talkative, social, and FUNNY!” That’s your boy when he’s with people he knows and is comfortable with and can be fully himself.

The frightened dog on the beach

We’ve been blessed to have a section of beach near our home where dogs can run freely. Lately, we’ve been taking a large mixed breed puppy we adopted there to exercise and socialize. He’s a lover. Despite having been neglected prior to rescue, he’s never met a person or dog he doesn’t like. But another recently rescued dog frequenting that beach, a small Chihuahua mix, has seemed seriously afraid. He barks and growls whenever other dogs are in the vicinity, and so his owner immediately scoops him up and holds him protectively, which tends to make matters worse, because dogs like mine become even more curious. The little dog gets so freaked out that all other dogs end up needing to be restrained until his owner leaves with him. As sweet, apologetic, and obviously concerned as the owner has been, it’s not fun to run into this dog.

So I was floored when the owner recently announced, “He’s okay now!” And sure enough, the change in her dog was miraculous. He still yipped and could easily be perceived as scared but was actually on the offensive, even assertive, and initiating play. At one point, he jumped up on my dog, who is several times his size. Thrilled and incredulous, I asked his owner, “What happened?!”  “Well, our vet said, ‘You just have to start trusting him with other dogs.’” And so, she decided to trust him rather than shielding him, and that was that. In other words, her misperceptions and fears had been exacerbating this issue in a huge way.

I can relate to your son. Why would he want to let someone else carry him? That’s an intimate activity — letting someone touch his body, trusting someone to hold him safely and comfortably in the air.

Why would he want to speak with strangers? What would he have to say? Small talk? He is being authentic, not rude.

Yes, it takes a very long time to get comfortable sharing yourself with people when you are sensitive to all their energy. That’s the definition of perceptiveness, and it’s a healthy trait. And what if you don’t entirely like what you see? “Please wait until I come to you.” That’s not weakness. It’s discernment and selectivity.

My Gym and Wondertree… Yes, those overstimulating places… Imagine being the attuned type of person who takes that all in, and wow, it takes a while to get a grip on these kids and what they’ll do… they’re so unpredictable. And why fight for a toy? It’s just an object. If you want it that badly, go for it. Squeeze through a crowd of kids? Uh, no, I don’t think so!

I guess, like me, your son will never be one for mosh pits.

Misunderstanding disconnects and distances us

Jumping to conclusions about our children blinds us to all they are doing. It’s natural to want to guide our children to the results we perceive as better. But our efforts can unintentionally teach children that they’re not quite enough just as they are. Magda Gerber advised the perfect antidote: “Do less, observe more.” And she acknowledged, “We all need someone who understands” and appreciates us as is.

A negative spin on positive traits

Sensitive young children may not seem impressive and smooth. They’re awkward and halting and sometimes blush at the drop of a hat. Why is that negative? I’ve come to appreciate my sensitivity as an asset without which I could not do the work I do today.

Children like yours, Melaine, are actually strong and present, patient and generous, aware and in tune. My recommendation is to embrace this guy. Trust his process. Encourage him to express whatever he’s feeling, and don’t judge or wish he’d improve. It’s perfectly normal and appropriate to feel unsure and want to hang back in social situations. Proceeding with caution is intelligent.

What if blushing was cool because it’s so caring and real? What if awkwardness was seen as endearing and brave? What if vulnerability was considered deep and powerful? It’s all in the way we perceive, and our kids need us to see through a lens of acceptance and appreciation, to celebrate and delight in all they are.

I share more on these topics in my posts: Empowering a Passive or “Shy” Child and What Children Know and Might Hurt Them. 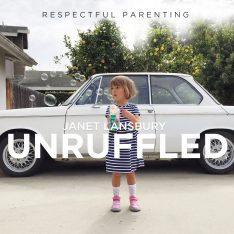 Stop Worrying About Your Preschooler’s Education 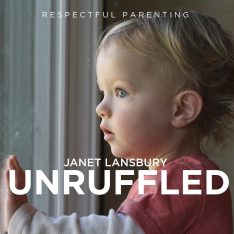