This short story perfectly illustrates the value of waiting before reacting when a child is upset, allowing the child her feelings as we seek to understand rather than “quick-fixing”. As adults, we need room to express our feelings so that we can release them and move on. Children are no different. This observant mom’s experience also reflects the natural tendency we all have to project about the feelings and needs of infants and toddlers. Enjoy…and let’s discuss!

I have recently been introduced to your blog, and from there have checked out Magda Gerber’s Your Self-Confident Baby from our library. I am discovering that while I don’t agree with everything Magda says, for the most part this is how I have been raising my children. It has been helpful to me in some areas where I was needing direction, and confirmation in areas where we do things ‘different’ than other parents we know. I think out of all the parenting books I’ve read in the last four years, this is one of the only ones that I would buy and recommend to others.

I was in the baby room with our eight month old, and our two and a half year old came in. She sat down with a toy and started playing quietly with it. After a few moments a toddler about a year younger (but not much smaller) came over and took the toy. Verity (our toddler) burst into tears. I said something along the lines of, “Did she take the toy? She wanted to play with it, too,” and continued to sit and watch to see what she would do.

As she continued to cry, three or four other mothers in the area began bringing her toys to distract her. I didn’t say anything, curious to see what her reaction would be. She continued crying, even when after a few minutes the other toddler got tired of the toy and a ‘helpful’ mother gave it back to Verity. As I watched it all, I became aware that her cry was not just for the toy, but that she was also probably tired. I asked her, “Are you sad?” “Yes,” she responded. So I told her she could go rest on the couch if she wanted until she felt better. She did, and less than a minute later, she was off doing something else.

It was interesting to see how much we assume with children, looking at their situations with our eyes instead of through theirs.

Anyway, I just wanted to share my little story with someone who I knew would appreciate it. 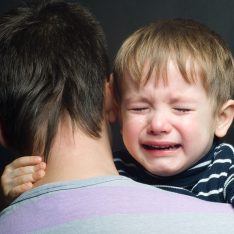 A Mental Health Mantra for Parents and Kids 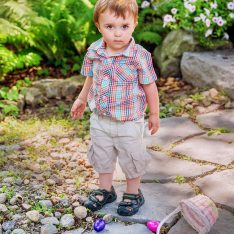 When Parents Invade Childhood (A Lesson in Distrust) 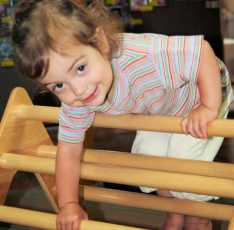 A Lesson From Babies…It’s Okay To Struggle