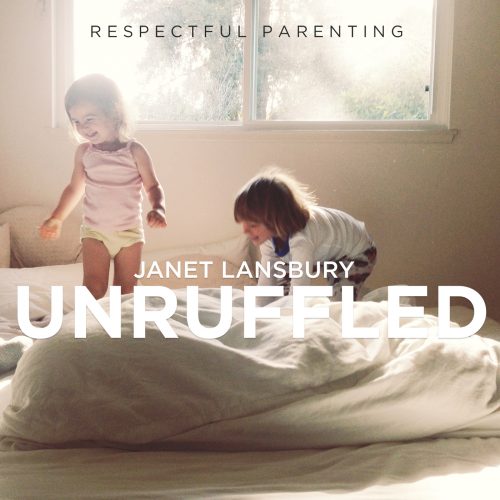 In this episode: Janet responds to a mother who writes that she tries to sportscast disagreements between her older two children, but since the 2-year-old isn’t verbal yet, she’s wondering how to sportscast situations effectively without making assumptions about what her boy may be thinking or feeling in that moment.

Hi, this is Janet Lansbury. Welcome to Unruffled. Today I’m going to be answering a question from a mom who really has her hands full. She’s got three kids and she describes her two-year-old, who is the middle child, as nonverbal. She’s wondering how to sportscast disagreements between him and his older brother without making false assumptions about what he’s thinking.

Here’s the email that I received:

“Hi, Janet! I’ve been loving your podcast for a while. It has helped me to stay calm in some situations I know I wouldn’t have before. I’ve noticed that my two boys usually solve their problems faster and better without my intervention. Awesome! What I’m hoping you’ll do a podcast on sometime is conflict resolution for nonverbal children.

Out of my three kids, ages four and a half, two, and three months, only one is really verbal and he didn’t even start until he was over two and a half years old. I try to sportscast disagreements between the older two, but it’s hard when I don’t really know what the two-year-old is thinking. I’m hoping you can give some tips, because I’m sure I’ll experience similar struggles with the baby once she starts interacting more with her brothers. Thanks!”

Okay, I’m really happy to hear that my podcast has helped this mother to stay calm, that’s important, and also that she’s noticing how her two boys can solve their problems without her intervention. Yes, that is awesome. That’s wonderful. Actually, children do this better without our intervention most of the time because our intervention trains them into believing that they are dependent on us, that they can’t do it themselves.

While we think we’re helping, and this is true with a lot of different kinds of helping that we do with children, helping sounds so wonderful but helping sometimes gives the child a message, or often gives the child a message, that, “You can’t do this. You need me to do this for you or to make it work for you.” Children build confidence in themselves and their abilities to resolve social conflicts with each other when they are able to experience and feel from us that we believe they can do it.

That’s a very important aspect of conflict resolution between children, that we believe them capable and that we’re only going to intervene in the most minimal way so that they can do the maximum that they can do safely. This mother also makes a comment about her child being nonverbal. What she means, I believe, is that he does not have expressive language yet. He definitely does have receptive language. Children begin learning receptive language from birth.

By hearing us speak words to them and to others, they start to comprehend and internalize language. He does have a lot of language, he’s just not speaking yet. With that in mind, what is sportscasting and how do we do this with children that are actually not speaking words? Sportscasting is actually just supporting children in their conflict. This can be with one child on his own or her own with an object or a project that they’re working on, and all it really is is acknowledging. Acknowledging what we see.
It really is just about the facts. It’s actually not about us trying to decide what someone’s intention is, what they’re feeling, what they’re thinking. It’s only what we know for sure that we reflect back to the children. That means, even with the child who is speaking, we wouldn’t decide what they’re thinking or what they want. We really don’t know. All we know is that you both seem to want this toy.

I wouldn’t even make comments like, “He’s still using this” or “He wanted to use this longer.” We actually don’t really know that for sure, even. Why does it matter that we’re so precise on this? It matters because the whole point of sportscasting is actually not just to give children language and help them feel heard and understood, but it is for us to remind ourselves not to project, to really be observant, and try to see from the children’s perspective rather than with our adult lens.

Projection is something that we all do, especially with children, especially with children who do not have expressive language yet. I love that this parent wants to be careful about that. I would be careful about it with any child because it’s really hard not to do. It’s such an inclination that we all have, to see, “He took that from you” and “You’re sad” instead of, “Wow, it seems like you’re saying ‘No, I don’t like that.'”

A lot of times, our projections tend to be our worst fear, or the worst case scenario. “He’s really sad and he needed that and you got that. You’re stealing from him.” To children, these kinds of struggles are interesting, actually very interesting. “What happens when I do this? Wow, hey, he got that. I think I want that, too.” They’re very in-the-moment. They don’t have these preconceived ideas of what’s right and what’s fair.

Actually, that’s how they are so able to learn conflict resolution. They don’t have these ideas that we might have, where we tend to close things off as adults because we make judgments about them. Children have this marvelous openness. They can see all the possibilities and they’re coming from a place of not deciding that this other person is being mean or a bad guy or stingy or grabby or anything like that.

They’re fluid with each other. Our role is restraint, just the facts, and really minimal intervention in that we don’t need to talk as much as we might think. We can wait until somebody looks puzzled or somebody looks at us or someone looks like they need some support in what’s happening. If those things didn’t happen, I would just be there and be present. “You guys both want this. It’s hard when you’re both holding onto this at the same time.”

Allowing them to have the struggle. Allowing it to be a loud, scary-looking struggle where no one is getting hurt. We are there to stop hands from grabbing each other and not allow hitting or pushing or touching each other’s bodies. They can both hold onto the object, if that’s what it’s about, but not each other’s bodies. Then if this is an object that we don’t feel safe about, maybe it’s something heavy, a truck or something that we’re not sure if someone’s gonna get hurt, we could say, “You know, I can’t let you struggle over this. This doesn’t seem safe. I’m gonna need to take this for now.”

That’s okay to do, as well. We have to make those kind of judgment calls. But mostly, I would give them free rein to struggle. That’s what allows them to experience and learn and master conflict resolution. Now, in terms of being preverbal regarding expressive language, I would understand that another positive to sportscasting is reinforcing those words for children and modeling speaking those words.

Maybe encouraging a little bit. Again, it has to be from a neutral place, but encouraging the expressive language in the situation. When you see something physical, let’s say the older child has something, the younger child wants it, he’s grabbing it, the older child’s getting angry, the younger child now wants to bite. These things are also going to happen when we’re not there and after the fact, we have to even more let it go and not overreact to the victim, making him feel like a victim and making the other child feel like the villain.

Children will read that from us if we’re fawning over the “victim” who very likely played a part in the conflict that we didn’t see. Children do. Siblings, they master each other. They know that other person very, very well. Maybe even better than we know our children. I wouldn’t take sides for sure, even after the fact. But in that moment, stopping that child from biting, we can say, “That makes you wanna bite. I can’t let you bite.” Meanwhile, your hand is there. You’re holding his shoulder back from his brother so that he can’t bite.

You’re making that impossible. There you can say, “Looks like you’re telling him, ‘No, I want that.'” Even there, where we are maybe a little bit trying to read what’s going on and maybe we’re not going to be totally accurate, I would say, “Looks like you’re” or “Seems like you’re saying” or “Do you wanna tell him,” not expecting that my child’s going to say it right there or do it right there, but just reinforcing that language to remind them that there is language for what they’re feeling and doing.

That’s it. The hardest part is letting children have the conflicts. That’s really the hardest part for us because it’s going to look really gnarly sometimes. That older child’s going to seem really mean. Maybe for some people it’s the younger child that seems really, really aggressive. We have to help both of them feel like we’re on their side. We’re their coaches, we’re not their referee. We love them both and both of them have a valid point of view in any situation. That’s basically what sportscasting is. It’s coming from that place in ourselves.

I think this parent will continue to see these wonderful results that she’s getting. I really hope that helps. 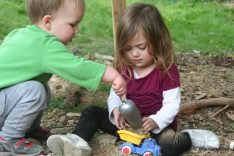 5 Benefits of Sportscasting Our Child’s Struggles 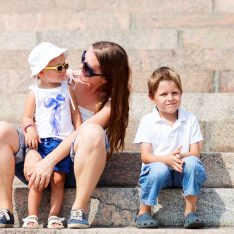 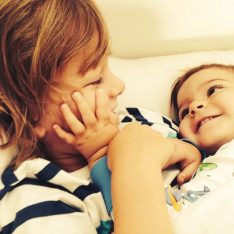